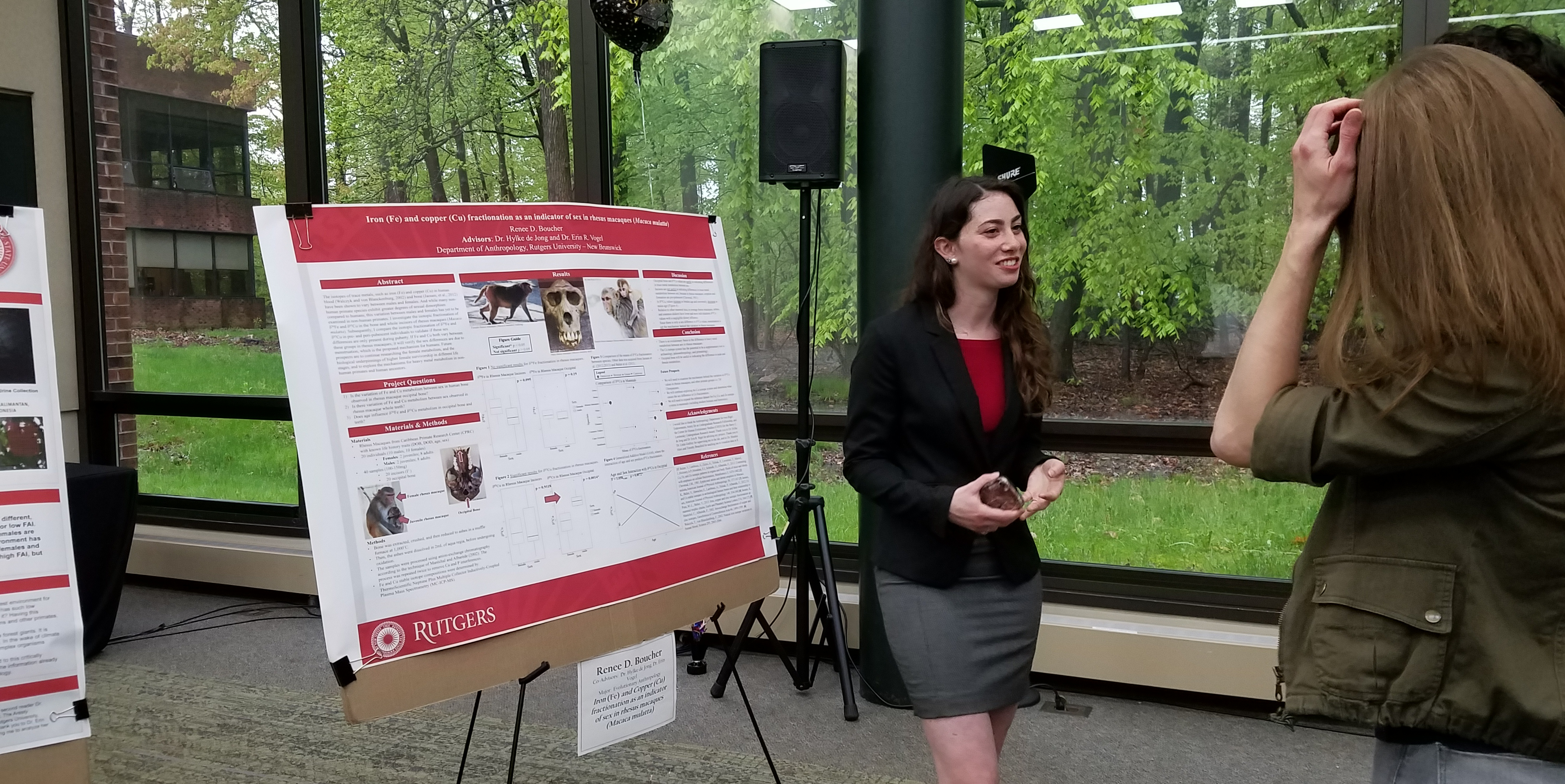 The Anthropology Department is pleased to announce our spring 2020 awards:

Anthropology Department 11th Annual Honors Symposium Awards
Honors students’ presentations of their work are judged based on the merits of the thesis work and quality of presentation.

Anthropology Department Honors Student Awards
Following the defense of their theses, honors students are given a designation by their advisors and second readers, according to this scale:

“Honors” is a considerable accomplishment and should be given to 60-70% of acceptable projects.
“High honors” should mark work that shows unusual excellence and/or effort in research and should be given to no more than 20-30% of the projects.
“Highest honors” should be awarded occasionally for work that might be publishable in a scholarly journal
“Interdisciplinary Honors” is awarded to students successfully defending a thesis through the interdisciplinary honors program

Paul Robeson Scholars
The School of Arts and Sciences has long continued the Livingston College tradition of designating students who complete a senior thesis as a Paul Robeson Scholars. Robeson, an accomplished and extraordinary student, wrote a senior thesis, The Fourteenth Amendment, the Sleeping Giant of the American Constitution, which fueled his famed valedictory address, The New Idealism.

ALL SUMMER 2020 courses are online - link to Web Registration

Some classes will be completely asynchronous (meaning all is posted, you can do your class at a convenient time for you)

Some classes will include online chats or meetings.

Why Major in Anthropology?

Anthropology teaches students to think in a critical way, and it exposes them to a fundamental part of the Western intellectual tradition. But it also gives them a perspective on their own position in a world of cultural, physical, and political diversity.  Anthropology seeks to understand the whole panorama of human existence in both geographic space and over long periods of time.  It offers a backdrop against which students can understand their own cultures, traditions, and behaviors and provides them with sensitivity to understanding human biological and cultural similarities and differences.

Cultural Anthropologists focus on understanding humans through a comparative perspective, one that teaches students to be acute observers and analysts of human behavior.

Archaeologists might jump back a million years to probe the survival strategies, successes, and failures of the earliest humans.

Linguistic anthropologists might scrutinize conversation to learn more about the place of individuals in the family structure.

View Our Majors
View Our Minors

The Undergraduate Director, Professor Robert S. Scott, can provide interested students with information and guidance in planning a major or minor, and discuss how anthropology can contribute to various goals.  Email for appointment: This email address is being protected from spambots. You need JavaScript enabled to view it.
Office Hours from January 21 to April 28, 2020: Tuesdays 10:00 am to 2:00 pm or By Appointment

Find out how to earn honors in anthropology.