Professor, Department of Anthropology
E-mail: This email address is being protected from spambots. You need JavaScript enabled to view it. 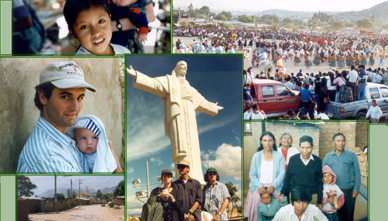 Daniel M. Goldstein is Professor Emeritus of Anthropology at Rutgers University, where he has taught since 2005. A political and legal anthropologist, Prof. Goldstein studies the global meanings and practices of security, democracy, and human rights. He is concerned with questions of law, violence, and social justice for marginalized urban people in Latin America and the United States.

Prof. Goldstein has written about problems of crime and insecurity for residents of the so-called marginal communties of Cochabamba, Bolivia’s fourth largest city, and the conflicts that arise when the quest to make “security” clashes with transnational discourses of human rights. His first book was an ethnography titled The Spectacular City: Violence and Performance in Urban Bolivia, published by Duke University Press in 2004. This was followed in 2010 by a collection titled Violent Democracies in Latin America (co-edited with Desmond Arias) and in 2012 by a second ethnography, titled Outlawed: Between Security and Rights in a Bolivian City, both from Duke University Press. Prof. Goldstein’s research and writing has been supported by grants and fellowships from the John D. and Catherine T. MacArthur Foundation, the Wenner-Gren Foundation, the National Science Foundation, the National Endowment for the Humanities, and the American Council of Learned Societies.

Coming soon, Prof. Goldstein’s next book is titled The Owners of the Sidewalk: Security and Survival on the Fringes of the Global Economy. This book examines the work of legal and illegal market vendors in the Cancha, Cochabamba’s huge outdoor market; it compares the security concerns of these two groups of vendors, to explore the consequences for people deemed “illegal” as they try to make a living in the city’s enormous informal economy.

At the same time, Prof. Goldstein is engaged in a new research project looking at the consequences of securitization of immigration for residents of a New Jersey town. This research considers the wave of laws currently emerging at the municipal and state levels across the United States, as undocumented Latino immigration is configured as a security “problem.” This project, funded by the Russell Sage Foundation and the National Science Foundation, explores the ways in which undocumented immigrants are not the passive victims of immigration law, but active users of the US legal system as they defend their rights and pursue justice for harms done to them in the United States.

In addition to his scholarly work, Prof. Goldstein has explored the possibilities of an activist anthropology, joining his pedagogy and research with projects to create social justice and advocate politically for and with his research subjects. In Bolivia, Prof. Goldstein created an anthropological field school/service-learning program in the communities in which he worked in Cochabamba. For five summers, he led a group of undergraduates as they practiced ethnographic research methods and engaged in service work with local communities in Bolivia. He has also worked as an activist on immigration issues and immigration reform in New Jersey and the United States.

At Rutgers, Prof. Goldstein teaches courses on human rights, political and legal anthropology, transnationalism and globalization, and the peoples and cultures of Latin America.

The Spectacular City: Violence and Performance in Urban Bolivia

Since the Bolivian revolution in 1952, migrants have come to the city of Cochabamba, seeking opportunity and relief from rural poverty. They have settled in barrios on the city's outskirts only to find that the rights of citizens - basic rights of property and security, especially protection from crime - are not available to them. In this ethnography, Daniel M. Goldstein considers the significance of and similarities between two kinds of spectacles - street festivals and the vigilante lynching of criminals - as they are performed in the Cochabamba barrio of Villa Pagador. By examining folkloric festivals and vigilante violence within the same analytical framework, Goldstein shows how marginalized urban migrants, shut out of the city and neglected by the state, use performance to assert their national belonging and to express their grievances against the inadequacies of the state's official legal order.

During the period of Goldstein's fieldwork in Villa Pagador in the mid-1990s, residents attempted to lynch several thieves and attacked the police who tried to intervene.

Since that time, there have been hundreds of lynchings in the poor barrios surrounding Cochabamba. Goldstein presents the lynchings of thieves as a form of horrific performance, with elements of critique and political action that echo those of local festivals. He explores the consequences and implications of extralegal violence for human rights and the rule of law in the contemporary Andes. In rich detail, he provides an in-depth look at the development of Villa Pagador and of the larger metropolitan area of Cochabamba, illuminating a contemporary Andean city from both microethnographic and macrohistorical perspectives. Focusing on indigenous peoples' experiences of urban life and their attempts to manage their sociopolitical status within the broader context of neoliberal capitalism and political decentralization, The Spectacular City highlights the deep connections between performance, law, violence, and the state.

Outlawed: Between Security and Rights in a Bolivian City 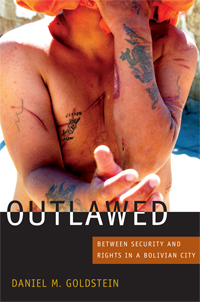 In 2013, the Anthony Leeds Prize committee awarded the prize to Prof. Goldstein’s Outlawed: Between Security and Rights in a Bolivian City (Duke University Press 2012).  The program committee described the book as follows:

[This] rich ethnography is based on a long engagement with indigenous residents of Cochabamba, Bolivia.  As they struggle to deal with various forms of insecurity, Cochabamba’s indigenous poor frequently find themselves “outlawed” in multiple senses: unprotected by the state, their own efforts to provide security are frequently criminalized.  And as the Bolivian state under President Evo Morales seeks to define greater rights for indigenous peoples, Cochabamba’s urban poor find themselves largely outside the new legal and human rights regimes.

Outlawed is a gritty ethnography of the insecurity and ingenuity that result when the state becomes an “active absence” in the lives of urban residents.  Dr. Goldstein builds his ethnography on detailed empirical research into both the selectivity of law and rights enforcement and the creativity of popular organizations for survival of the poor in squatter settlements.  From beautifully told ethnographic narratives Dr. Goldstein develops a convincing theoretical insight that works at multiple scales.  His writing captures and helps his readers to understand the lived experience at the interface between personal/community insecurity.  These experiences are in turn located within wider urban and transnational dynamics that make Outlawed an important book for understanding contemporary urban processes well beyond Cochabamba.  Set in a region that produced much of the earliest work on post-war urban anthropology, Outlawed nevertheless makes a significant contribution by shifting focus from the dominant themes of urbanization and development.  Finally, the Leeds Award recognizes Dr. Goldstein’s careful attention to method in both the fieldwork and writing of Outlawed.  His book draws on personal participation and observations in Cochabamba and a series of collaborations between residents and student fieldworkers.  The result is a fruitful, critical interrogation of urban insecurity as an object of ethnographic inquiry.