(PhD , U Colorado, 1975; Visiting Research Associate) Human sexuality, gender differences, mate choice, romantic love, evolution of the brain This email address is being protected from spambots. You need JavaScript enabled to view it. 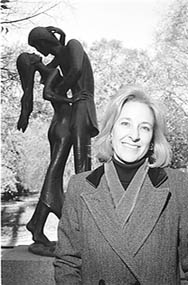 Dr. Fisher has been on the national lecture circuit since l983 discussing the evolution of human sexuality, marriage and divorce, gender differences in the brain and behavior, and the future of men, women, business, sex and family life. Her lectures include speeches at the American Museum of Natural History, the Smithsonian Institution, the University of Michigan, the C.G. Jung Institute of Chicago, Planned Parenthood of NYC, the U.S Department of Agriculture, the American Menopause Foundation, the Brookings Institution, Bank of America, Salomon Smith Barney, Fortune Magazine, Columbia Business School, and the American Press Institute, as well as academic and business conferences in the United States, Canada, Europe and Asia. During 1994-95 Dr. Fisher lectured on college campuses as a Visiting Scholar of the Phi Beta Kappa Society. View a copy of Dr. Fisher's curriculum vitae.

Since l983 Dr. Fisher has served as an anthropological commentator and consultant for businesses and the media. Her contracts include those with NBC?s Today Show, WNET TV (New York), The Canadian Broadcasting Corporation, The Reader's Digest, Time-Life books, Match.com, Roper Starch Worldwide, Procter and Gamble, National Starch and Chemical Co. and Leo Burnett. She was the host of a four-part TV series, Anatomy of Love, for Turner Broadcasting Systems in 1995 and the host of a four-part radio series, What Is Love?, for the BBC World Service in 2004. For her work in communicating anthropology to the lay public, Helen has received the American Anthropological Association's "Distinguished Service Award."