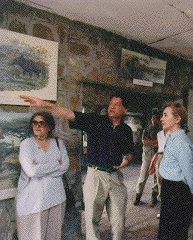 Read the abstract or full text of the following article in Science written by Dr. Blumenschine and his associates:

My interests lie in the evolution of human behavior, particularly the dietary and subsistence behavior of our early stone-tool-using ancestors. I have conducted zooarchaeological and taphonic research in India and throughout sub-Saharan Africa, focusing since 1983 on the Serengeti region of northern Tanzania. One thrust of my research uses wildlife studies to help decode the hominid behavioral signal contained in fragmented animal bones found at two million year old archaeological localities in East and South Africa. My long-term observations on the food remains at large carnivore kills in the Serengeti, and of ecological factors that affect competition for carcass foods, suggest that human behavioral origins may owe more to a scavenging way of life than to hunting. Recent analyses of early archaeological bone assemblages from Olduvai Gorge also suggest that scavenging was the dominant means by which early members of the genus Homo acquired the nutricious foods of animals found at this locality.

Since 1989, my main research efforts have gone toward co-directing archaeological research at Olduvai Gorge with Dr. Fidelis Masao one of Tanzania's senior prehistoric archaeologists(This email address is being protected from spambots. You need JavaScript enabled to view it.). Our Olduvai Landscape Paleoarchaeology Project (OLAPP) is composed of a large, interdisciplinary team that combines archaeological and paleoenvironmental sampling of discrete time periods at broad, landscape scales, with studies of modern ecosystems partially analogous to the prehistoric setting. Our goal is to determine the diet, ranging, and technological strategies of hominids over large areas (ca. 400 sq. km2) of the paleo-Olduvai Lake Basin for single time periods during the Early Stone Age.

Follow this link to the Leakey Foundation, a nonprofit organization committed to increasing scientific knowledge and public understanding of human origins and evolution.