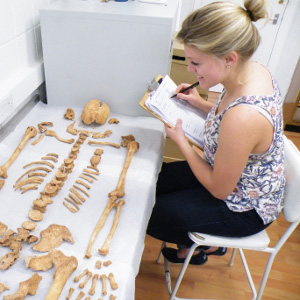 Devin Ward is a 2014 Evolutionary Anthropology Rutgers graduate. After graduation, she first spent the summer as a field technician with the Northeast Archaeology Research Center. In the fall of 2014, she enrolled in the Biological Anthropological Science MPhil program at the University of Cambridge, UK. Devin’s masters research focused on mapping levels of nonspecific physiological stress during skeletal growth, using micro computer tomography (CT) scans of Ancient Egyptian and Nubian individuals from the Duckworth Collection.

Upon successfully defending her thesis in the fall of 2015, Devin moved to Gibraltar where she worked on the “Death on the Rock” project (a cooperation of the Government of Gibaltar and the University of Cambridge), studying skeletal remains from a post-medieval hospital cemetery.  When the project’s field season completed, Devin accepted a position as a Research Assistant in the Department of Anatomy at Midwestern University in Arizona working with Karen Baab and Chris Heesy, using 3D visualization software of CT scans to study modern human robusticity variation and functional constraints on orbit convergence in birds.  Devin began PhD study in Anthropology at the University of Toronto with Bence Viola and Mary Silcox in fall of 2016. Her research focus is on variation in the bony labyrinth of the modern human inner ear.

During her three years at Rutgers Devin worked with multiple faculty members, including Rob Scott, Erin Vogel, Jason Lewis, and Susan Cachel.  Working as a research assistant while at Rutgers Devin helped with lab setup, project planning, literature research, budgeting, and grant applications. She took advantage of many funding opportunities at Rutgers from the Anthropology Department, Douglass Women’s College, the Aresty Research Program, and the School of Arts and Sciences Honors Program. These scholarships paid for travel to an internship at the New Jersey State Museum, archaeological fieldwork in Italy, and attendance at two conferences.  Devin published research from her state museum internship. Her work in Italy led to an Anthropology Honors thesis and Devin remains associated with the Rutgers University Archaeological Field School in Italy now as a staff member.